The Subject Was Roses by Frank Gilroy

The Beauty Queen of Leenane

“Highly Recommended” – “Ferrell Marshall is excellent as Maudie and creates a warm and believable character that carries the audience through the story.” – reviewplays.com

“A WOW!” – “A lovely Ferrell Marshall imbues Maudie with warmth and wisdom.” – StageSceneLA

“And the to ‘grownup’ Scout who narrates so movingly, as well as breathing soul into the admiring Miss Maudie, young-at-heart, Ferrell Marshall. – Easy Reader, Joseph Sirota

“A grown-up Scout, played purely and wistfully by Ferrell Marshall, narrates in retrospect, and with the flick of a hat also slips in and out as the sympathetic townsperson, Miss Maudie.”
– Canyon Newspaper 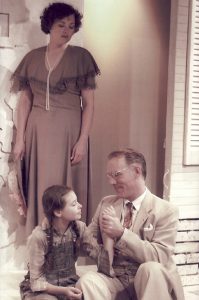