“All My Sons” by Arthur Miller 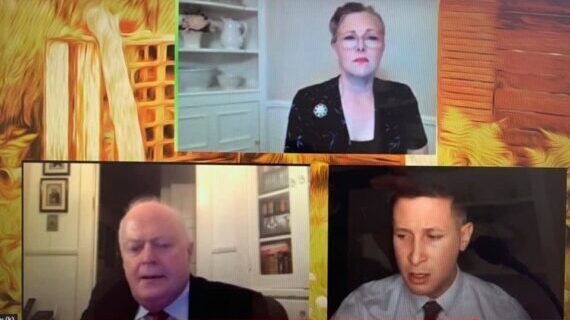 All My Sons written by Arthur Miller
Directed by Ashlee Bell Caress
Streamed Live on YouTube on December 19, 2020

Virtual theater is bazaar, challenging and wonderful all wrapped up into one.

I was delighted to perform in Dig Deep Theatre’s staged reading of “All My Sons” by Authur Miller last night in the role of Kate Keller. We performed on Zoom and it streamed live on YouTube. Our fabulous director, Ashlee Bell Caress, held two kinds of rehearsals – one focused on the acting elements and the other on what she called Zoom-Ography. To make sense of how to move in this new world, I would write RCR (Reach Computer Right) and LDCL (Look Down Computer Left) in my script instead of XSR (Cross Stage Right) and XDSL (Cross Down Stage Left).

My dining room served as the Stage as well as Backstage where I would sit awaiting my entrances with all of my props within reach and, the Dressing Room for my quick costume changes and the Lobby to connect with the cast and friends after the show.

Our fabulous and wise Stage/Zoom Manager, Hayley Silvers, orchestrated all the design elements as well as entrances and exits. The cast was in charge of muting/unmuting our microphones. When she informed us that we would be starting the show in five minutes, we all enthusiastically chimed in with “Thank you, five!” – a beautiful touchstone to the theater that we all miss so much!

If you have never seen this show the following is a SPOILER ALERT:

One of the most nerve wracking things that can happen in live theater is when a critical sound cue is not heard. Aaaaaand that happened last night! A gun shot that was clearly heard at rehearsal the night before created by an actor that was “off stage” was not ringing in our ears. But a brief moment later we heard Hayley say “Gun shot.” Here’s the thing, although the actors heard her voice, the audience heard the actual sound. She had wisely prepared for something going wrong. Thank you, Hayley!

I’m so very grateful to have been given the opportunity to play in this bazaar, challenging and wonderful world! However my wish for 2021 is to be able to ESL (Enter Stage Left) to share a story that entertains a healthy and happy audience in a sold out theater!